Search Site
Menu
Home / Blog / Can You Challenge Your Prenup When Getting Divorced?

Can You Challenge Your Prenup When Getting Divorced? 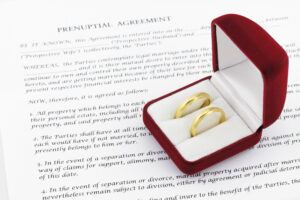 However, prenups are not always legally binding and in some scenarios they can be challenged in court. In most cases, challenges are raised during a subsequent divorce proceeding when one of the signers realizes the prenup has placed them in a position of getting far less than he or she would normally be entitled to under Michigan law.

The enforceability of a prenup can be contested in Michigan based on the circumstances in which it was signed. The agreement can be voided if any of these are true:

Another common ground of attack is that enforcement of the agreement would be unconscionable because the facts and circumstances have changed significantly since the agreement was signed. For instance, imagine that both spouses earned substantially similar incomes at the time they signed a prenup that called for each of them to keep their property separate. But during the course of the marriage, one spouse became much wealthier. At the time they divorce, the other spouse might argue that enforcing the original agreement would be unfair and unreasonable.

However, Michigan courts have rejected prenup challenges based solely on the grounds of one spouse having accumulated greater assets. There must be other factors that would contribute to making enforcement of the original agreement unconscionable. That is why a well-drafted prenuptial agreement can be made bullet-proof with the aid of an experienced family law attorney.

At Dawson Family Law, PLLC in Sterling Heights, we are dedicated to protecting the rights of spouses who have signed prenuptial contracts. If you want to challenge your prenup, we will carefully review your situation and advise of the possibility of having the prenup voided. Call 833-671-4445 or contact us online to schedule a consultation today.