How Relocation Can Affect Child Custody 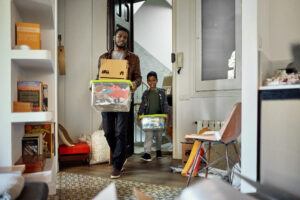 Workable joint child custody plans depend on the parents living close to each other, or close enough that traveling between them to fulfill parenting time is not problematic. But changing circumstances may lead a parent to seek a relocation, whether to take a better job, to pursue an education or to be closer to family. Since this can strain or interrupt the child’s relationship with the other parent, that parent’s consent or the approval of the court is required for relocations over significant distances — specifically, those of more than 100 miles.

The 100-mile rule is embodied in a Michigan statute and requires a court, in a case where relocation is contested by a parent with joint custody, to make a decision based on whether the move will let both parents continue to have meaningful involvement in the children’s lives. There are several factors the judge will consider, namely:

The overriding concern of the judge will be whether the relocation and the change in custodial environment and parenting time are in the best interests of the children.

A parent who has sole legal custody of a child must request court permission for a move greater than 100 miles, but the court does not have to analyze the same factors. Under no circumstances can a child be relocated out of state without court approval.

If the custodial parent moves less than 100 miles within Michigan from the children’s residence at the time the family court judge entered the original child custody order, the approval of the non-custodial parent is not required. If, however, a move is made, whether that move is less than or greater than 100 miles, which results in a change of a child’s school district, the parent who intends to move may have to obtain the court’s permission for a child to attend the new school district if the other parent disagrees with the school.  Even though the law allows a move of under 100 miles without the permission of the other parent, as a practical matter, any change of a child’s school district must be approved by both parents, or a hearing would need to be scheduled before the court.

Dawson Family Law, PLLC advises Michigan clients on child custody issues and other family law matters. If you are considering making a relocation request or opposing one, please call 833-671-4445 or contact me online to make an appointment for a free initial consultation at my Sterling Heights office.