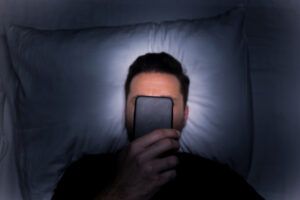 Emotions tend to run high during a divorce, but it’s best to think twice before you take to social media to vent your frustrations or send a text fueled by anger. A rant written in the heat of the moment could have long-term consequences for you and your family. Social media posts and text messages are often presented as evidence during divorce proceedings.

Michigan is a “no fault” state, where the only ground for divorce is a breakdown of the marriage relationship. Although a spouse’s misbehavior is irrelevant to whether or not a divorce is granted, a judge may consider evidence of spousal fault when making rulings about alimony (“spousal support”) and property division. Judges also consider claims of domestic violence when determining custody and parenting time arrangements.

A message or social media post that indicates any of the following may play a significant role in a divorce case:

Over the last few years, text messaging has become extremely prevalent. I have been involved in a number of cases recently in which text messages have played crucial roles in a judge, arbitrator, custody investigator or mediator’s decisions. Unfortunately, many people are upset with their spouse, or significant other, and quickly send text messages to them, which are degrading, vulgar and often times, worse. Text messages are then sent back and forth, increasing in vulgarity. Generally, one party then files a motion with the court and attaches numerous text messages. I have been involved in cases where over 100 messages were sent or received by one person to another in a single day.

I have often told my Clients not to send text messages or, at least, limit them to very brief and specific items, such as “what time are you picking up the children.”

My clients, when I discuss text messaging with them, often tell me that their spouse or significant other made them very angry so they wanted to retaliate and send a message letting their spouse or significant other know exactly how they feel. It can only backfire. As a result of the ill-advised text message, Judges have ordered people to vacate the martial home, have ruled against a party seeking custody and have ordered substantial attorney fees.

Recently, I was in a child custody interview, where the mother pulled out numerous text messages from the father, which essentially berated her, cursed at her, threatened and harassed her. There were numerous text messages each and every day for the past several weeks. Originally, the father denied sending the text messages and when they were produced and shown to him, he came up with a lame excuse as to why they were sent. Needless to say, the investigator’s recommendation was adverse to his interest.

I was involved in another case where a man denied having an affair with a woman. He was confronted with records of hundreds of daily text messages. He claimed he was not sure who he sent hundreds of text messages to daily or who sent him hundreds daily. In the end, his credibility was severely challenged because it became clear that the text messages were sent to his girlfriend.

I have been telling my Clients “please do not send text messages or, if you do, limit the frequency of them.” Generally, that advice is ignored.

There can be absolutely no advantage to send threatening, harassing or vulgar text messages to your spouse or significant other. They can only hurt you in the end. Before typing a text message and hitting the send button, think of the possible consequences and delete it rather than send it.

The same advice for text messages is applicable to social media, such as postings on Facebook, Twitter and other platforms. Please use caution in doing so. Facebook is an excellent source of information. People have posted pictures of themselves with their girlfriend/boyfriend, drinking to excess, using drugs and engaging in other indiscreet activity. I had a case recently where a man posted a picture of an antique vehicle he had just purchased for several thousand dollars cash. This was after he had claimed to the court, a few days earlier. that he had no funds. The ramifications against him were severe.

The best advice is not to use any social media or text. Should you still decide to do so, limit your texts or postings as much as possible and be aware that everyone has the ability to view same.

If you have questions about how text messages or social media posts may affect your divorce, Dawson Family Law PLLC in Sterling Heights can provide valuable insight. I have over 40 years of experience handling family law and Michigan divorce cases. Call my office at 833-671-4445 or contact me online to schedule a free initial consultation.