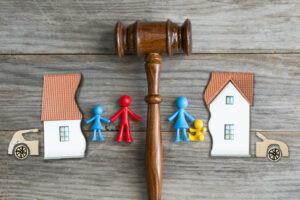 In 2019, a Michigan appeals court affirmed an earlier court decision that a man who won $80 million in the lottery while going through a divorce owed half of the winnings to his ex-wife. Why? Although the couple had split up two years before the man purchased the lottery ticket, their divorce had not yet been finalized, so the winnings were legally considered “marital property.”

Marital property — which can include both assets and debts — is jointly owned by both spouses. From the moment a couple is married until their marriage is ended by a final divorce order, the couple’s finances are legally tied together. With only a few exceptions, any income or property acquired during this period is marital property, even if the couple is separated but still legally married. Income or property that one spouse owned before the marriage, or received during the marriage from an inheritance or as a gift, is often considered separate.

Identifying which property is “marital” and which is “separate” is an important and potentially stressful part of divorce proceedings. Michigan follows the equitable distribution rule for dividing property in a divorce, where the goal is to ensure that each spouse’s share of the marital property is fair but not necessarily equal. Courts can consider several factors to determine an equitable distribution plan, including each spouse’s income, needs and wrongdoings.

Separate property is generally exempt from the equitable distribution rule and is retained by the individual owner. However, property that was once considered separate may become marital if assets are intermingled. In addition, a court order may apportion a share of separate property to the other spouse if they “contributed to its acquisition, improvement or accumulation” during the marriage, or if the division of marital property alone would leave one spouse without suitable support.

A divorcing couple will typically be at odds over who has a right to various assets, from the shared marital home to employer-provided retirement plans. Parsing out each spouse’s ownership claims can be tedious, but providing a full account of separate and marital property is necessary to a just and correct distribution of assets and responsibilities.

In my work at Dawson Family Law PLLC in Sterling Heights, Michigan, I utilize more than 40 years of experience practicing family law and divorce to help people throughout Macomb County hold onto the property that is most important to them. If you are considering a divorce and have questions about asset division, call my office at 833-671-4445 or contact me online to schedule a free initial consultation.